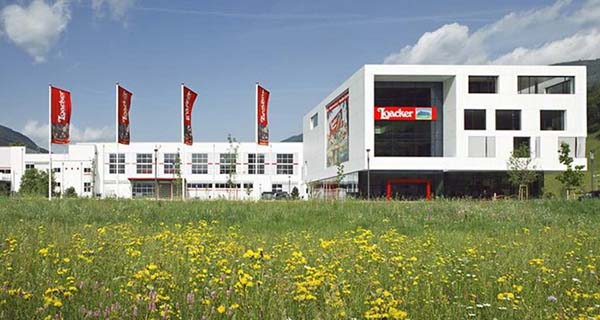 Loacker – the South Tyrolean confectionary manufacturer – has sort out a significant enlargement of its existing establishment in Heinfels, South Tyrol, by setting up an administration building and by increasing production capacities. The overall has required a total estimated investment of about 70 million euros until the end of the year. The new and cutting the edge factory will create, in a preliminary step, 40 to 50 new jobs, thus increasing the total number of Loacker Group employees to 800. The number of employees working in Heinfels is estimated to be 300 by then. At the same time Loacker expanded and diversified its product portfolio, adding fine patisserie, chocolate snack bars and pralines to its product range, next to its historical wafer production core competence. To create the foundation for long-term production capacity needs for product innovations, the company is now forging plans for growth.

THE AIM IS TO SATISFY FOREIGN SALES – The Italian confectionary group has been able to expand the international commercialization of its products over the last years. The positive results both in Europe and North America served as a good base and enabled the company to further grow its sales also in the Middle East, Africa, Asia and Oceania. “We’ve planned the gradual implementation of the new production facility for the second semester of 2016” said Loacker Group official spokesman last year in a press release. And now the plan has been shaped yet. Starting from April this year, the production of Loacker Quadratini and Gardena range of items are manufactured in a single round of work. While starting from September 2016 and until the end of the year, the company said, the output will be doubled in volume.