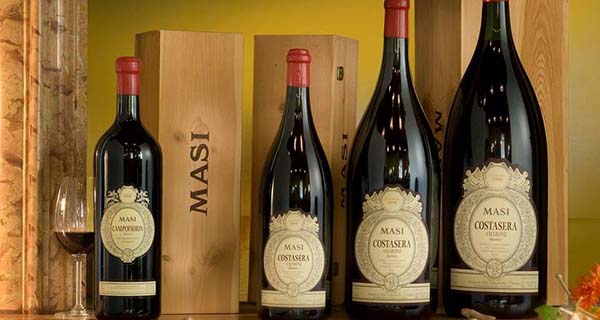 Masi Agricola, known for its Amarone offerings from northern Italy’s Veneto region, is sourced by the US market. The wine producer has long had a significant U.S. presence, where, according to Impact Databank, it has registered strong growth in 2015, with Masi’s American business showing a 14% sales rise over the first six months of the year, compared to a 5% company-wide increase. The company, which exports more than 90% of its 1-million-case production, counts the U.S. among its key overseas markets, along with Canada and Sweden. “Of the three, the U.S. is now increasing the fastest”, says Raffaele Boscaini, president of Masi Technical Group.
The U.S. portfolio is led by Masi Amarone della Valpolicella Classico Serègo Alighieri Vaio Armaron, which ranked eighth among Wine Spectator’s Top 100 wines 2015. Also getting heavy focus in the U.S. are Masi’s Costasera Amarone and the ripasso-style wine Brolo Campofiorin . “These are our three identity wines, which are driving growth for us both on- and off-trade,” says Boscaini.
While Masi has had a sustained presence in the U.S. market’s upscale Italian segment, it changed a few different importers before aligning with its current partner, Kobrand, in 2013. Prior to linking with Kobrand, Masi was handled by Folio Fine Wine Partners, and before that it was part of the Rémy Cointreau USA portfolio for much of the last 15 years. With a clear distribution strategy now set in place and more favorable exchange rates, which is providing a tailwind for imported wines, Masi is now positioned for U.S. expansion, president Boscaini says.