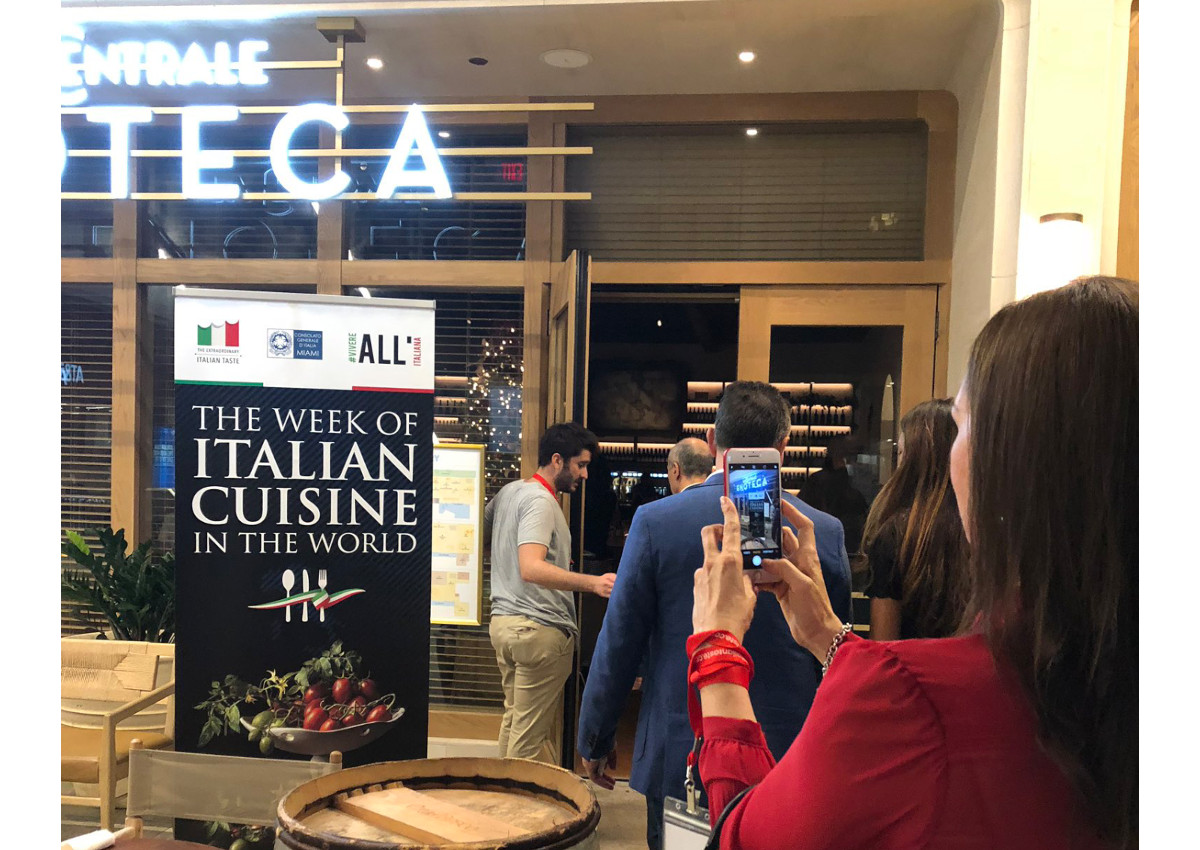 The excellence of Italian cuisine was the highlight of the third edition of the Week of Italian Cuisine in The World, an international coordinated effort to promote Italy’s high-quality food at a time of growing demand for sustainable, authentic and natural products. A total over more than 1,000 initiatives took place in 110 countries from November 19-25, with the participation of the Ministry of Foreign Affairs and the Ministry of Agriculture and Italian embassies, consulates, offices of the Italian Trade Agency and Italian Cultural Institutes around the world. The gallery of events spanned from dinner events with Italian and local chefs to film screenings, seminars and exclusive night celebrations, highlighting the values of authenticity and the wealth of regional specialties that are coming to countries around the world.

ITALIAN FOOD EXPORTS TO THE US

Exports of Italian food products to the United States increased 5.4% to 4.8 billion dollars in 2017 from the previous year, according to data by the Italian Trade Agency in New York. In the first nine months of this year, exports were up 9.8% to 3.758 billion dollars. Italy is also the first exporter of wine by volume and the second by value. “Italy is as a symbol of excellence, especially in the food sector. Quality, tradition, passion and innovation are the distinctive trait of an innovative sector that was able to beat tough competition and establish its leadership in the US market,” the Ambassador of Italy to the USA Armando Varricchio said. The Week of Italian Cuisine in the World was launched to spread the knowledge of authentic regional specialties and give a boost to the fight against counterfeiting. 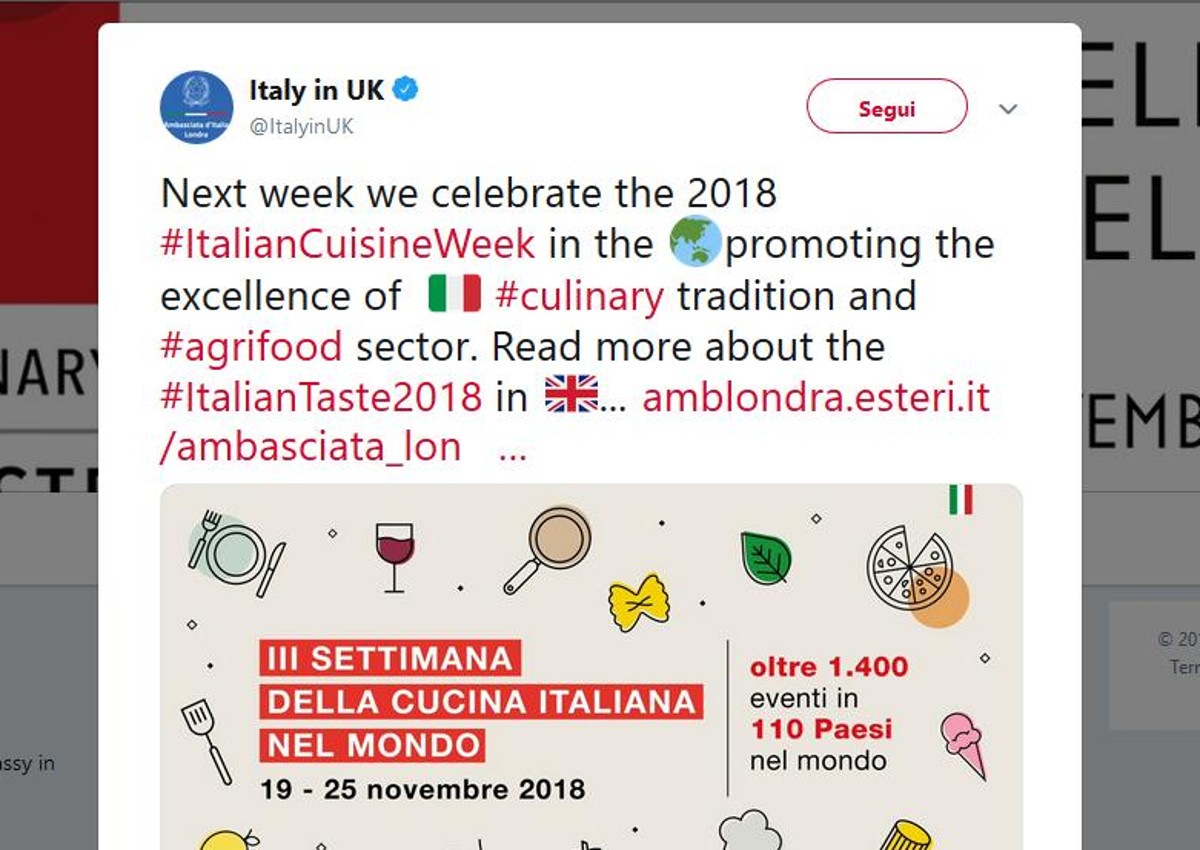 THE WEEK OF ITALIAN CUISINE IN THE WORLD

Many regions were represented in the participating countries, including Puglia in the United States and Emilia Romagna in Canada. The week also featured the “Pasta Pesto Day” initiative to support the Liguria region after the tragic collapse of the Morandi Bridge in Genoa. Italy is the European country with the highest number of certified quality products, with 299 regional specialties labeled as protected designation of origin (PDO), protected geographical indication (PGI), and guaranteed traditional specialties (GTS). While Italian food is mostly known for its unique delicious taste, it is also rich in natural and genuine products. In recent years, Italian producers have invested in traceability, sustainability, biodiversity and food safety. 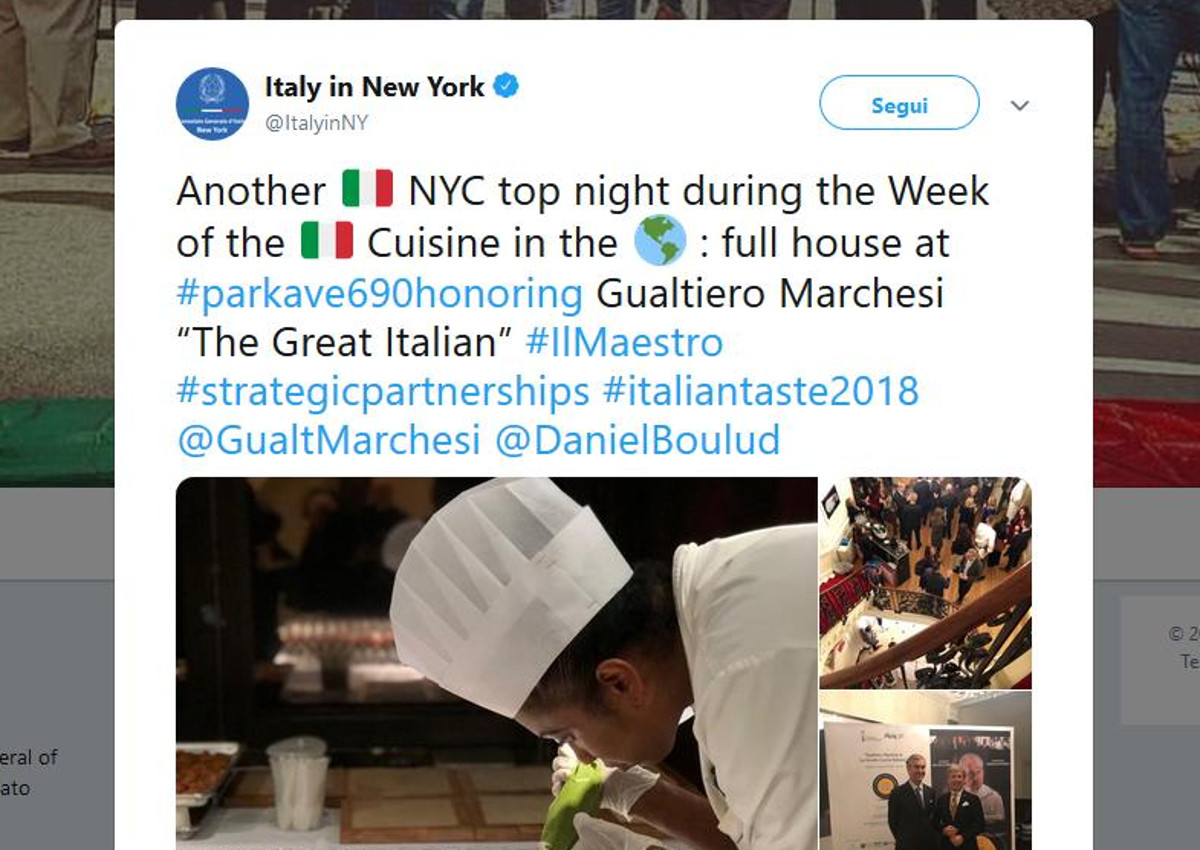 HIGHLIGHTS FROM THE USA

The United States, the world’s largest buyer of Italian food products outside of Europe, participated in the Italian cuisine week by organizing multiple events from New York and Washington DC to Miami. In Washington DC, the Embassy of Italy hosted the projection of the documentary Villani by food activist and chef-deejay Daniele De Michele focusing on farming, fishing and family cooking. The program included a conference on SmartGrid for Urban Food Systems at Georgetown University, a photographic exhibition about maritime traditions in Puglia by reporter Francesco Cito, a concert by acclaimed jazz pianist Kekko Fornarelli and the ‘Night of the Taranta’ at the Embassy of Italy to celebrate the traditional pizzica dance. An exclusive dinner with starred chef Franco Ricatti from Ristorante Bacco in Barletta at the Residence of Ambassador Varricchio concluded the events in the US capital. In Chicago, the Italian American Chamber of Commerce in partnership with the Consulate General of Italy, the Italian Cultural Institute in Chicago and Isola imports organized Taste of Puglia, an exclusive tasting of traditional dishes and products from Puglia including olive di Cerignola, taralli, orecchiette alle cime di rapa, salsiccia barese, fave e cicoria, wines and much more. 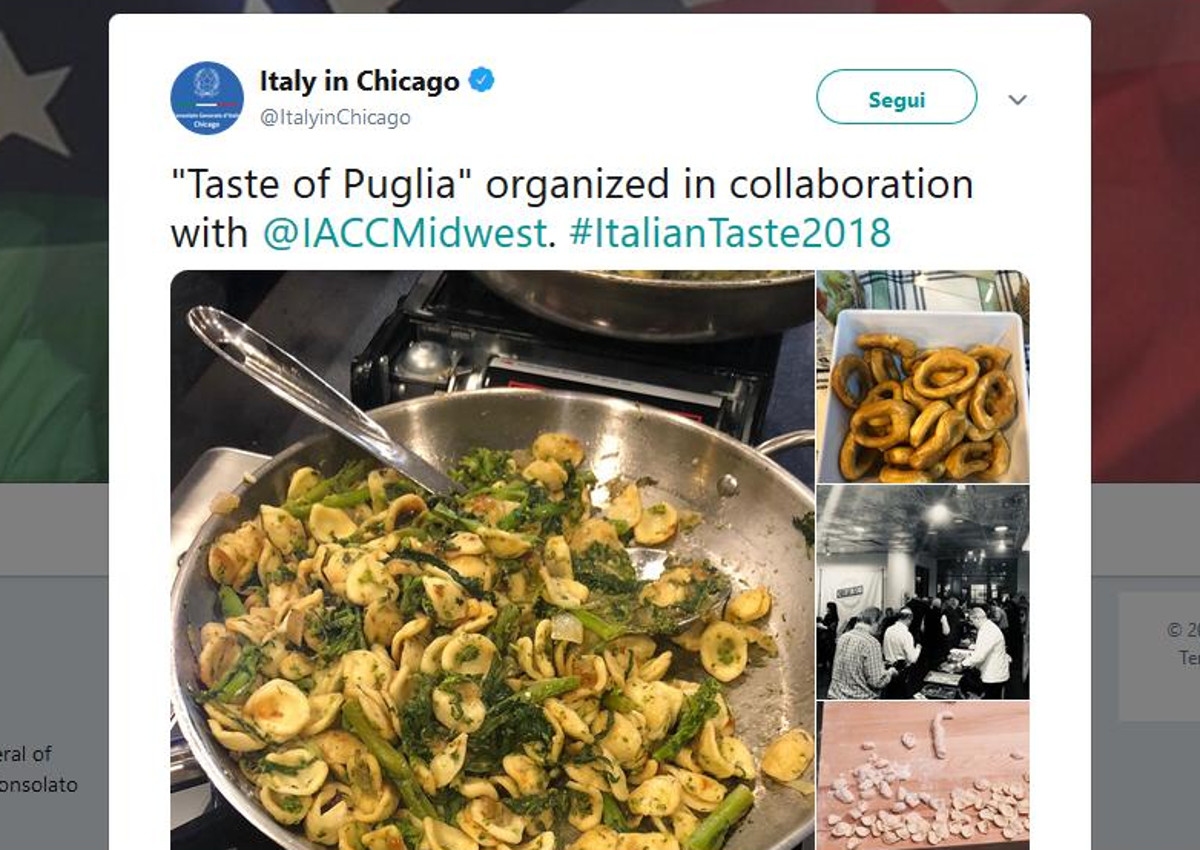 Events took place also in Miami, with the participation of Consul General Cristiano Musillo. The rich program included a seminar at the Miami Dade College Culinary Center with Chef Cristina Bowerman, and a tour in Miami with the Chamber of Commerce and La Centrale. Glamorous initiatives were held in New York. Part of the program were special dinners at Blackbarn, a renowned restaurant in downtown Manhattan, and at Armani Fifth Avenue in collaboration with the Consulate General of Japan in New York. The Apulian cuisine was also celebrated in Los Angeles, where starred chef Felice Sgarra was special guest of the Consul General of Italy in LA Antonio Verde. In San Francisco, the program saw the participation of starred chef Maria Cicorella, also a great culinary ambassador of Puglia. 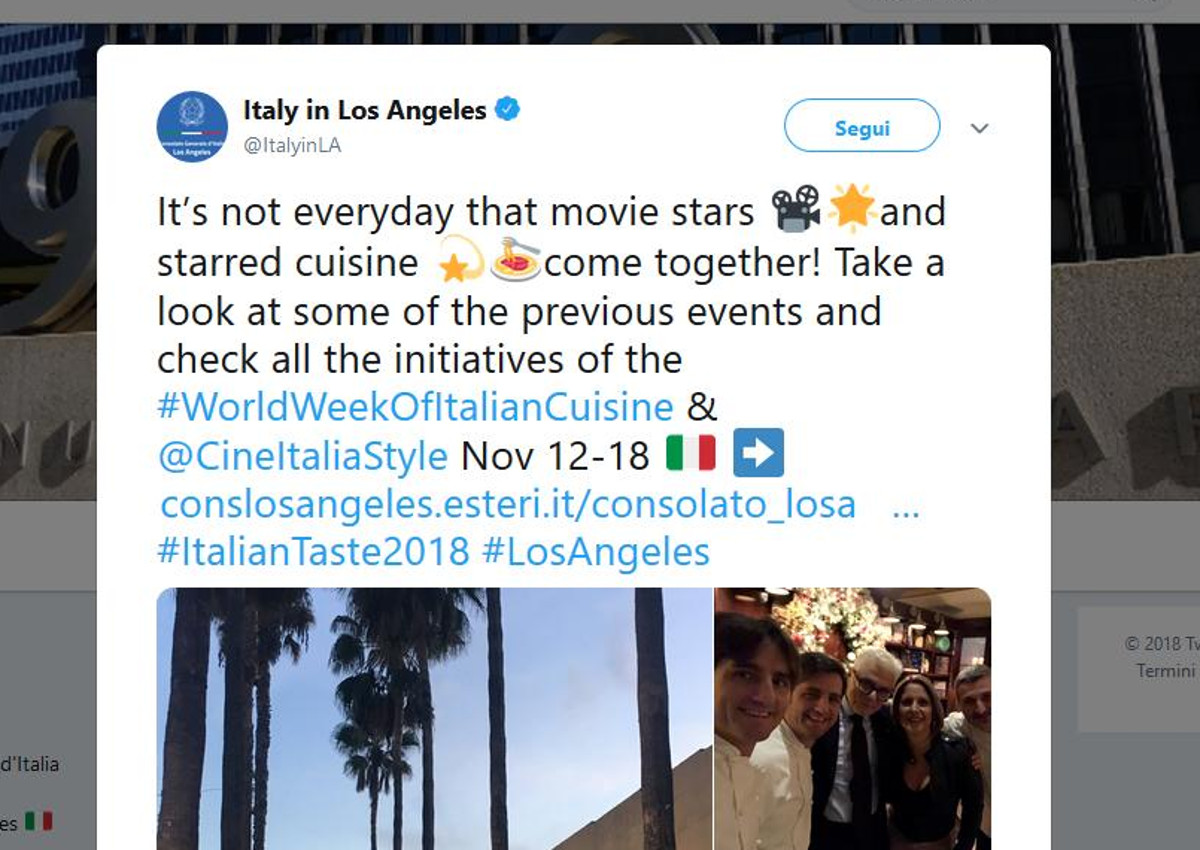